Here are some pictures taken when I went, with Bob, to lobby MEPs in the European Parliament in Brussels. We were trying to convince them not to pass the EU Directive on Software Patents, and to instead pass a set of amendments on it that expressly omit pure software from patenting.

The funny thing is that we hadn't planned to go. I got an e-mail on Tuesday 26th on a mailing list asking if people could go, all expenses paid, last minute. I said yes, and a day and a bit later I'm sitting on a plane to Brussels with Bob for free. Weird. We stayed overnight in the Centre Van Gogh, where I'd stayed last summer, and then the next morning went off to find the parliament... 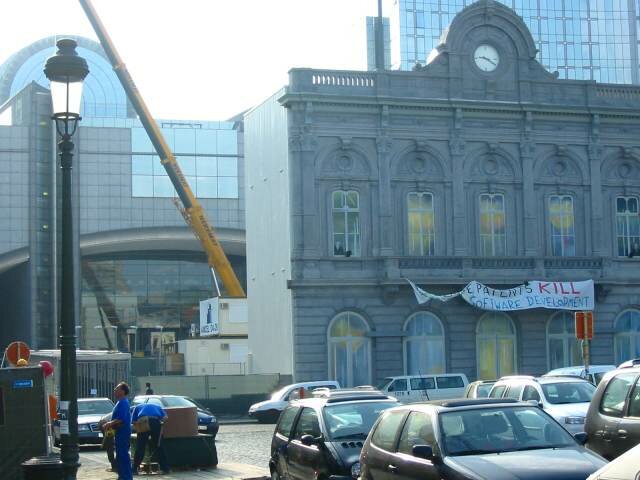 Aha, after wandering down the street from the Metro station, we see this. We must be close :-) The banner, by the way, says "Software patents kill efficient software development".

Lo-and-behold, I stand outside the European Parliament. Now to get in... we had to call up a lobbyist who was inside, who then brought an MEP's assistant down to help us get in. We weren't really meant to be wandering around in there un-escorted! 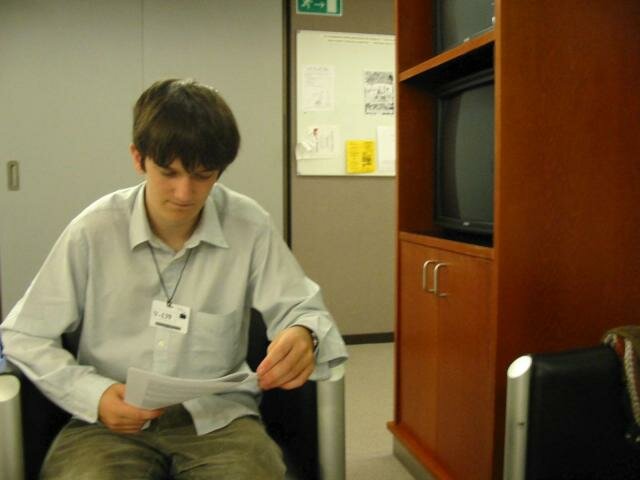 Now inside, we got to work, which meant lots of reading to catch up on lots of news, and in particular amendments and discussion that had been flying around while we were travelling. Once we were up to speed, we drew up a list of Conservative MEPs who were local to us, and went to try and create a divide between them and their coalition, the PPE-DE.

First stop, our local MEP for Bedford, Robert Sturdy MEP. At least he saved us from worrying about whether or not we had got the hang of the room numbering system, though we're not so sure that Bedford is "only an hour away" from Brussels. 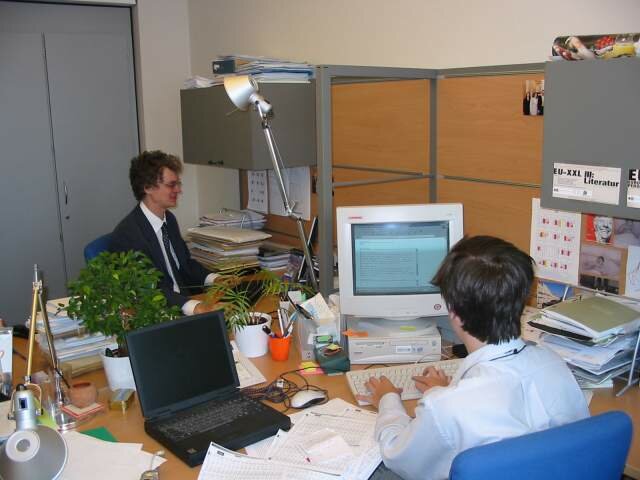 We spent some of our time sitting in offices looking up information on MEPs, and typing up a log of information we had gleaned from our meetings. Again, we were at the behest of the MEPs who were sympathetic enough to lend us their office. We did go and talk to my favourite MEP, Caroline Lucas, and get an offer of space from her assistant, but we eneded up in an Austrian MEPs office.

When we weren't in an office, we were sitting around this lobby area in the Greens' block; that must be why they call it lobbying :-/ One interesting thing is that whilst the Tories' walls had the occasional local poster, and lots of stickers saying "Proud to be Conservative" or "Vive le Quid!", the Greens' and Socialists' walls were absolutely covered with funky posters :-)