This is a collection of photos I've taken at StopEsso days, and other things surrounding the campaign. In time when I'm bothered I'll try to scan in older photos.

For those mystified, visit the StopEsso homepage here. The campaign is about getting people to boycott Esso (ExxonMobil outside the UK), hopefully providing enough consumer pressure to get them to reverse their appauling track record with the environment...

A few billboards got the StopEsso treatment in the week leading up to the event on May 18th. This is a bit of a rubbish example, but oh well. Lots of stickering too.

We managed to persuade Rob to wear the tiger suit - fetching! And I promise that is Rob in the suit, even though it looks like I've just pasted his head onto another photo!

A George W. Bush mask and a tiger suit in one photo... what more could you want?

These two kids were playing on a grass verge right next to / behind us for most of the day, and eventually I went and gave them some stickers. They soon went home, and a short while later they returned with this poster they made themselves :) They also went mad with stickers. Wow, we're so naughty encouraging funky kids :)

As you can see, the first one we did was far more low-key. We only organised it a few days before (StopEsso had a mixup and forget to tell me I was the organiser), and only had three or four people at any one time, with few materials prepared, but we got a fair few bits and bobs up, which were visible enough to show we were there :)

Here's tarro standing across the road from the petrol station handing out leaflets. We had 500 of them, and didnt think we'd give them all to motorists, so we handed them out to pedestrians too. In the end we handed out about 600!!! (I had printed my own off before StopEsso sorted themselves out and sent us 500 more). The traffic lights caused some meaty traffic jams, so we managed to give loads out. 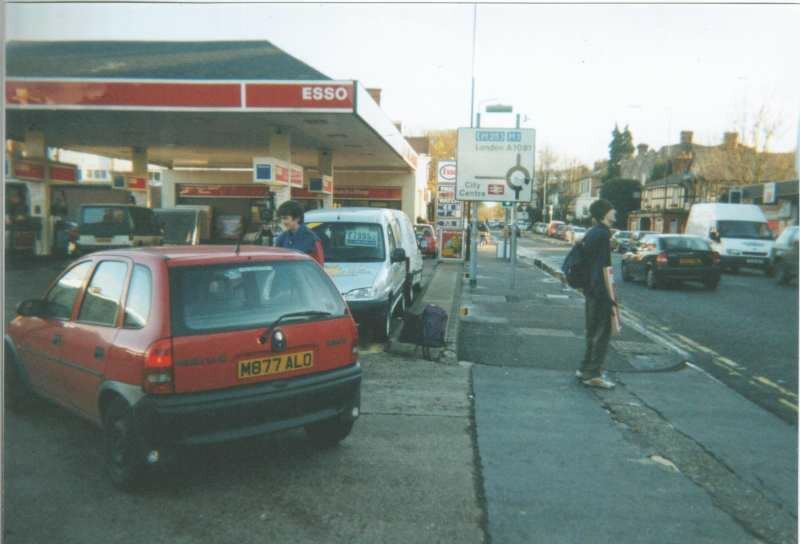 Bob and I spent most of the day standing by the entrance trying to stop motorists coming in, to convince them to go to a different station. We were fairly successful, and managed to turn away about a third of the cars. Bob had too much fun pimping his "Beep" sign to motorists!

Here's another one of bob pimping his sign, whilst wearing my gloves and hat, leaving me to freeze. Tsk. Some people. We did manage to stay out there a *long* time though, we arrived at 11am, and left at 4pm, because it started to pour down with rain and we had no more leaflets left.