OK, so you went to one of the demos, or you saw some pictures on the news and was disappointed not to see a huge group of hardcore anarchists trashing London... well here's my photo-diary version of the day just to add to your confusion :-)

The day for me started in Grosvenor Square just after 10am, where lots of embassies are situated, including *ahem* the US embassy :-) People who had been riding around London blocking traffic as part of the critical mass bike ride (reclaiming the streets from cars for cyclists and pedestrians) were meeting up here, so we felt a little silly not having bikes! Once the crowd got fairly large, we went on the march, and proceeded to walk around Mayfair randomly changing directions to avoid being hemmed in by the police for about two hours... 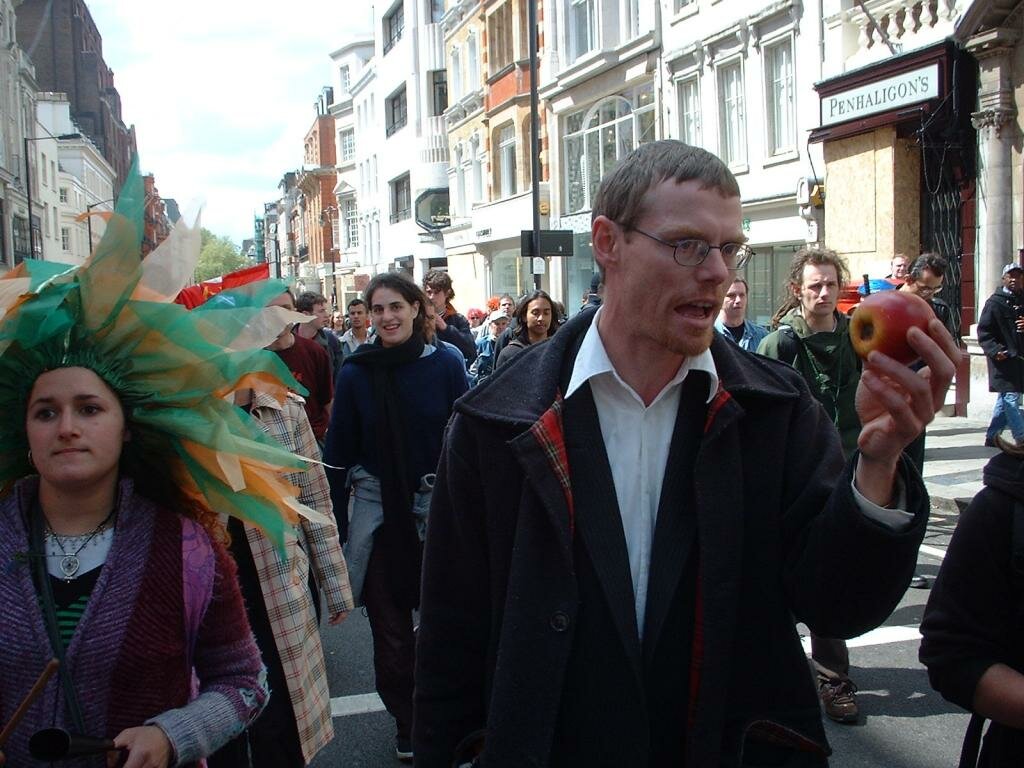 A nice ecentric photo to start off with :-) The start of protests are always the best bits because the crowd is so full of fantastic costumes, instruments and other weird and wonderful arty things. 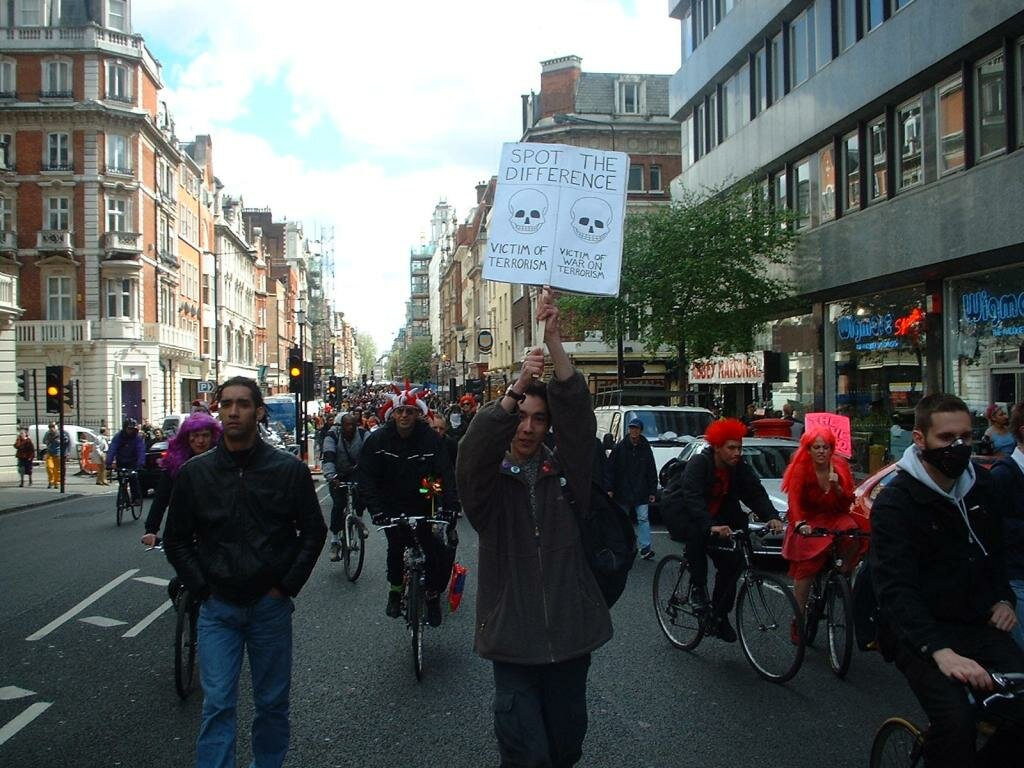 Things quickly gathered pace and size and by about 11am or so the crowd moving around Mayfair was pretty big. We were blocking just about every street we went through or past, needing only a few people to completely block off the flow of traffic. It gave us an opportunity to try and explain or express the motives behind reclaiming the streets to pedestrians too, encouraging them to just cross roads and block traffic for once, instead of having cars dictate their movements whilst polluting their lungs and their atmosphere, cutting up the countryside, killing thousands of people a year, bankrolling all kinds of corporate naughtiness, and, oh, sorry, I'm rambling again! 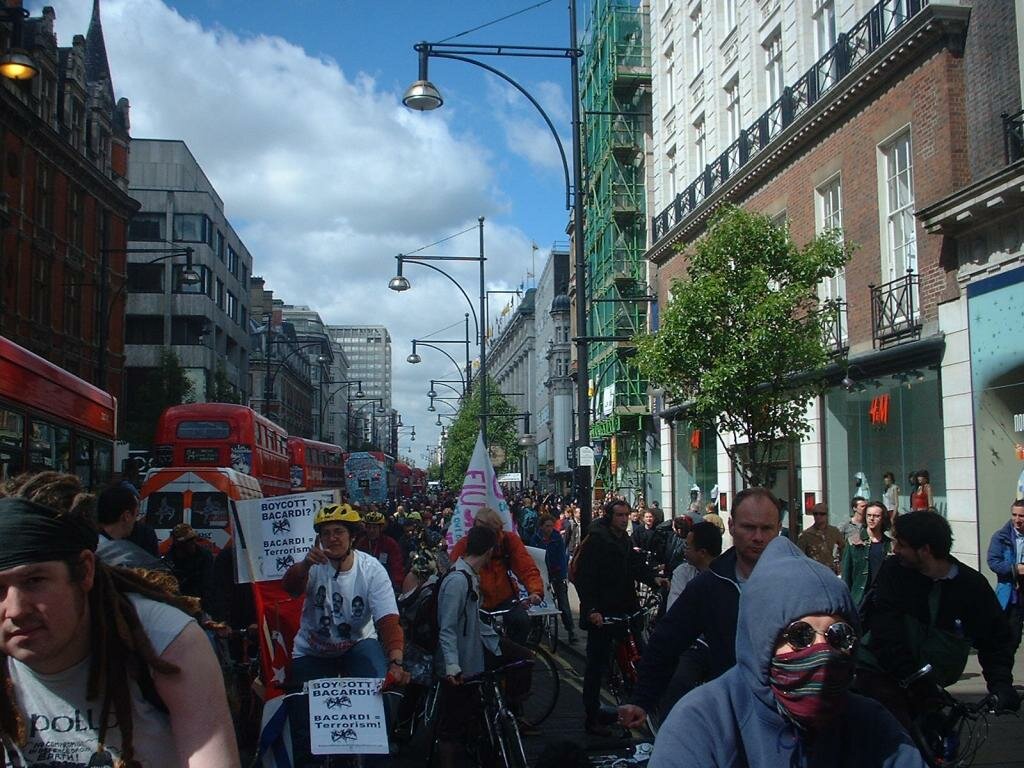 So yeah, quite big. There were loads of buses hemmed in on one side of the road which was great because lots of drivers came out to talk to protesters and generally enjoy themselves, leaving the people in the buses to watch the fun as it went past, reading our placard (yeah!). People in big expensive cars were either confused, a little scared, or damn angry that we were holding them up. 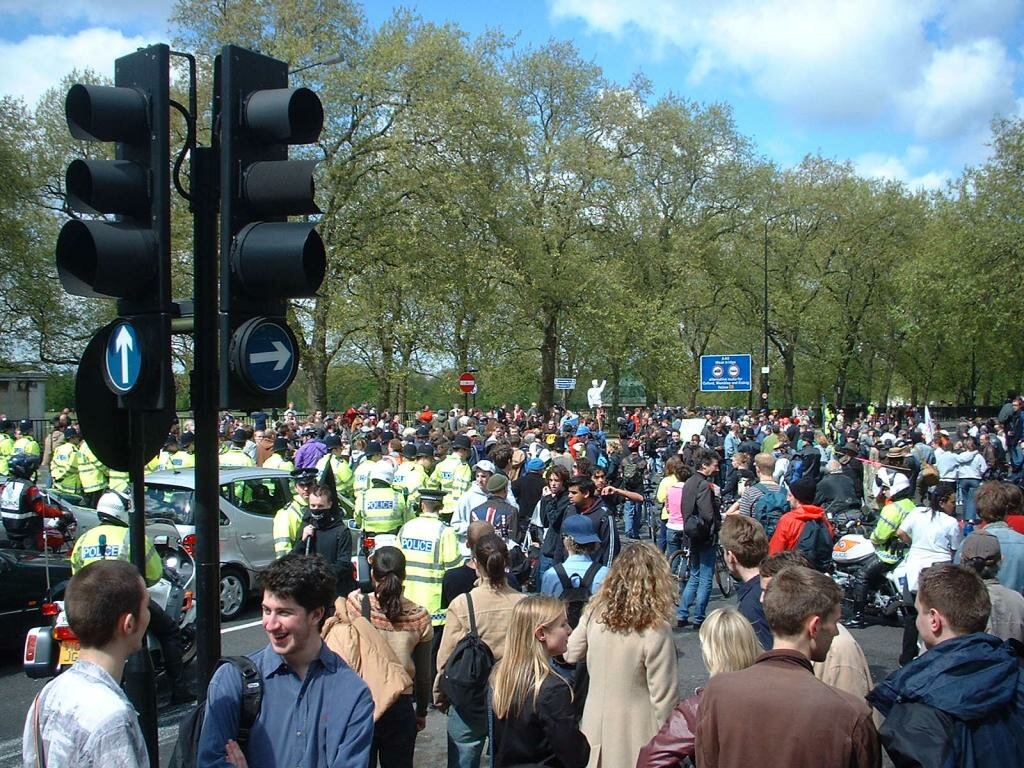 At about 12am we reached Hyde Park, and after a little hanging around (we were unsure about the intentions of six riot police vans that had pulled up full of normal metropolitan policemen and women), we moved into Hyde Park and had a really nice picnic in the sun, with a little football game going on. 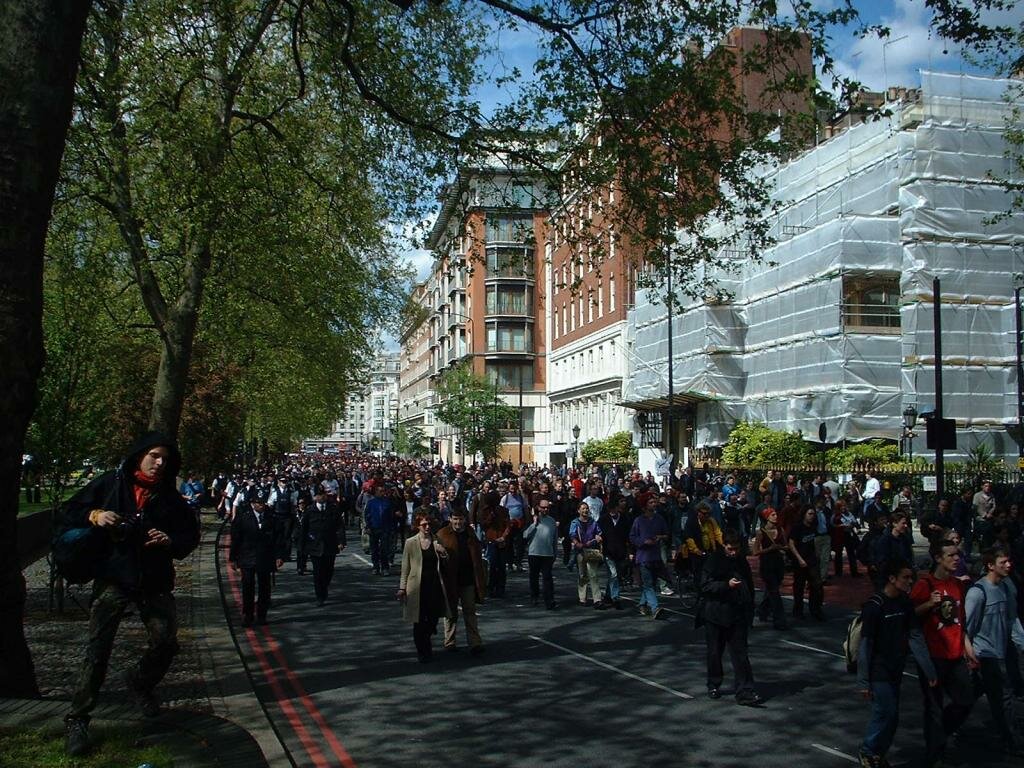 After lunch, we got up and started to walk around Mayfair again (hey, its fun don't you know?!), and by this time most of the "hardcore anarchists" (*ahem*) had coalesced so the crows was pretty big, filling the length of Park Lane with carvinal fun. Lots of balls of all descriptions being kicked around, music, and generally a lot of fun in the streets :-) We continued like this, taking really weird routes through Mayfair to avoid police gatherings, for hours, just having loads of fun and meeting lots of cool people. The streets were reclaimed for most of the day :D 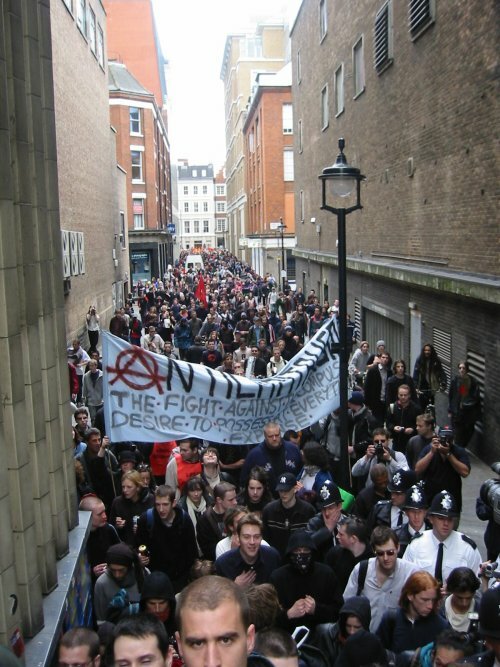 The police *almost* managed to stop the procession by blocking the two major streets we might have turned down, so everyone went down this really tiny side street instead. One hell of a squeeze as I'm sure you can imagine, not helped by the police trying to block people at first, and then lots of stupid photographers getting in the way for about 10 mins before they were pushed away. 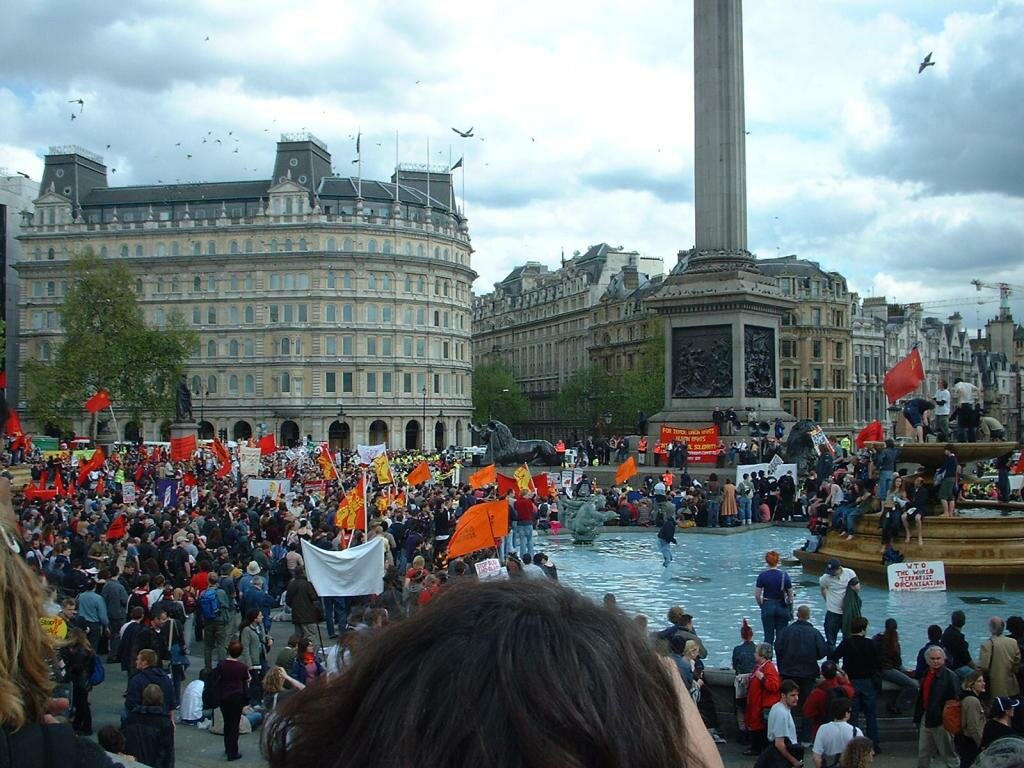 By about 3pm (I think it was then anyway) we'd made our circles take us right next to Tragalgar Square, and after some confusion most of us turned to talk alongside it to see how the TUC+Socialist Worker Party demo was going on. They had about 10,000 people which wasn't too bad I suppose. Lots of the usual silly speeches, all repeating themselves and preaching obvious things to the converted went on, deluding themselves into thinking trade unions hold some magical power over the Labour party! I got bored of it all after about ten minutes, but lots of cool people milling around. A bit of an anti-climax, as we had to go home by that point (partly through tiredness on my behalf, staying up too late!). 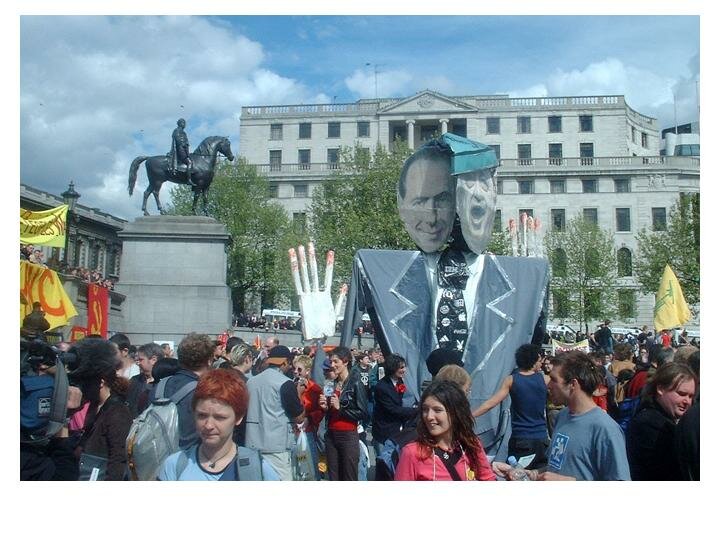 Wow, this was one fantastic puppet. It has the logos of a load of multinational corporations on the tie, and a rotating head sporting the faces of Blair, Bush and Berlusconi, and I think one other (was it Prescott? Probably not... Le Pen?)... 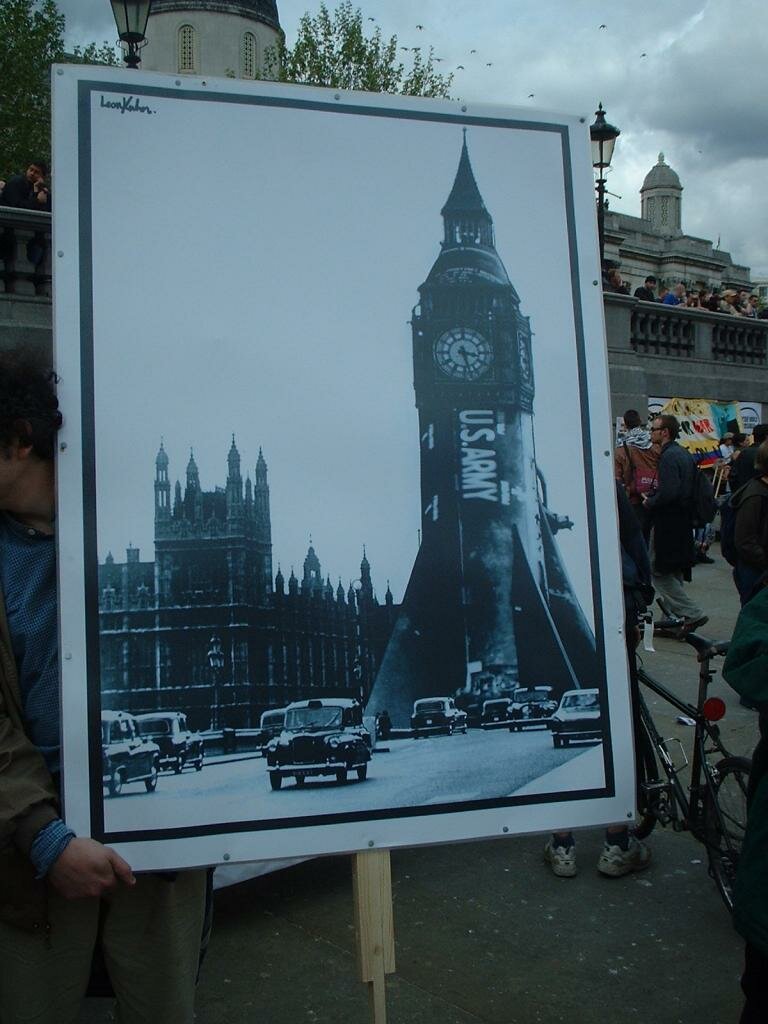 One good thing about Trafalgar Square was that we saw this fantastic picture by an artist called Leon Kuhn. What a nice end to the day. Well, that was until I got gome and found the mainstream media had scarcely reported our march, the BIGGER one, and had put loads of attention on the TUC+Socialist Worker Party march. Oh well, at least our march didn't get swamped by the SWP's bloody placards!