Year upon year, new students stumble around supermarkets bewildered, seeking out the cheapest form of sustainance on sale. We all, at some point, come across and consider the humble noodle, packaged with a small sachet of flavouring, and sold at a price that indicates they were designed with the farmyard in mind. But which brand to buy? Do you go for the cheapest, and be honest about your culinary values, or do you select a more expensive brand in an effort to save your tastebuds?

Fear not, for we have found out for you.

To determine the best noodle, we went out and bought a range of noodles, from the cheapest (8pence per pack!) to the top of the range. To make it a fair test, we standardised on chicken flavour.

We begin with three packets of noodles, the favoured value varieties (left to right: Tescos Value, LIDL and Sainsbury) 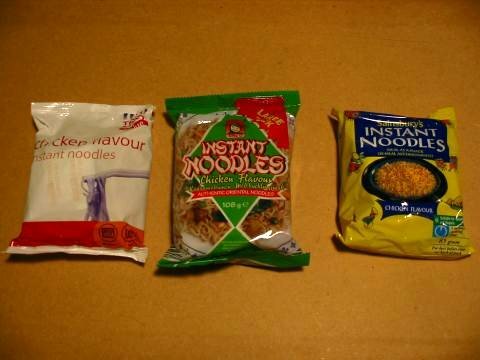 Three pans were prepared, and water heated to boiling point. 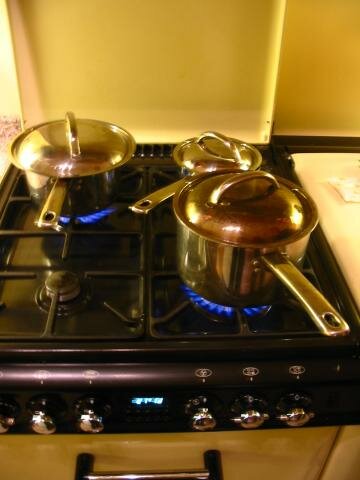 Once water was boiling, the sachets of sauce were stirred in, and then the noodles themselves. Each packet of noodles was cooked according to their recommended instructions (amount of water, cooking style, cooking time), so the LIDL noodles were given a 30 second head start. 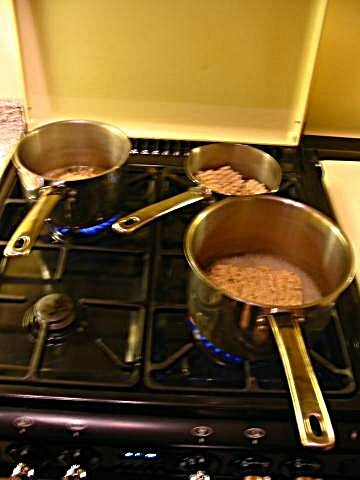 Toby was our head chef, principally because he strikes such a fetching middle-class middle-aged pose. 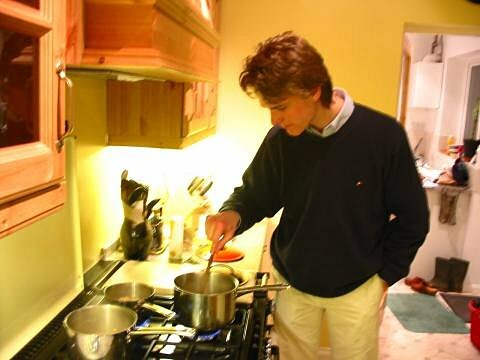 Once cooked, the noodles were laid out for inspection. This gave us a moment to appreciate the visual qualities of each brand, before we sampled the goods. A table was drawn up for each brand, so that we could each mark each brand according to three criteria: 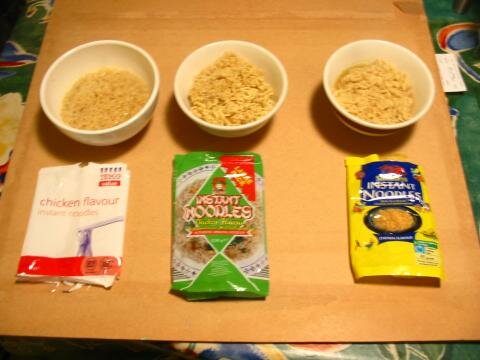 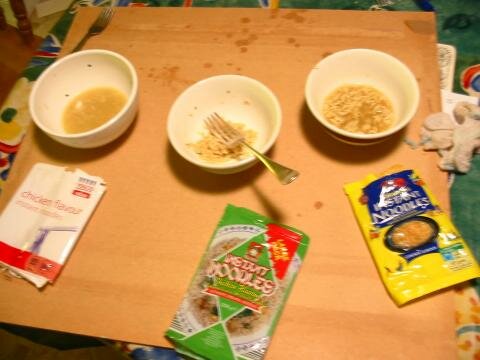 With our bellies full of noodles, we put the forks down and wandered off to watch some Mystery Science Theatre 3000 (Prince of Space!) and washed the flavour away with some cheap white wine from LIDL (yes, we admit bias). Upon returning to the kitchen, Toby and I went up to the hobs and prepared to cook more noodles. 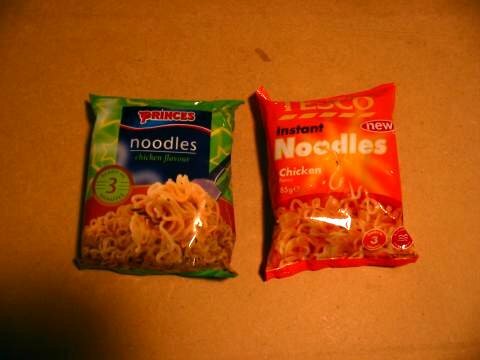 A point of note: we can also compare Tesco brands internally here; though it is our anecdotal experience that Tesco Value is often better than normal Tesco food (with the exception of dairy and alcoholic produce), we were unsure as to how their noodles would fare. But they were immediately cast in good light when, upon opening the Princes noodles, the packet split! Oy noy! 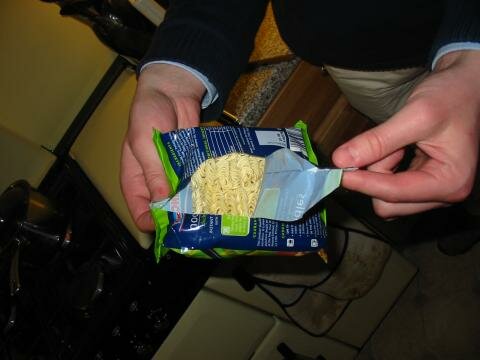 We soldiered on regardless, and cooked the noodles according to instructions. 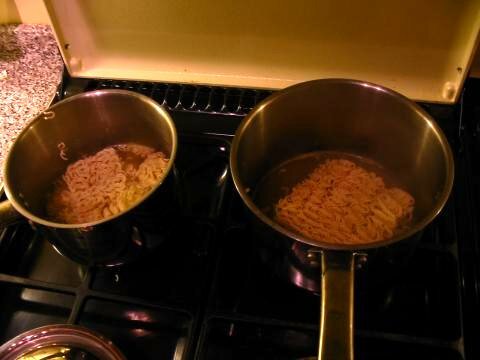 And did gobble them down with glee. Well, actually, by this point there were murmurings of dissent and dissatisfaction from those less familiar with this volume and range of noodles. 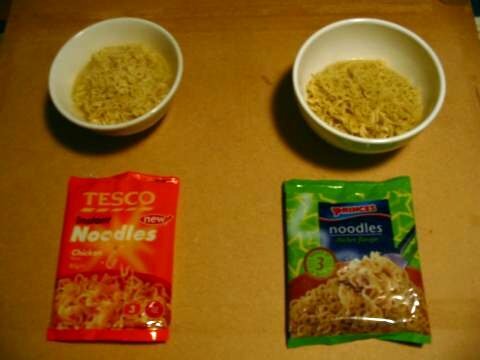 Wanting to waste no more time, we went straight for the final batch, pitting the pricey Blue Dragon against the equally pricey Heinz. Do you get what you pay for? 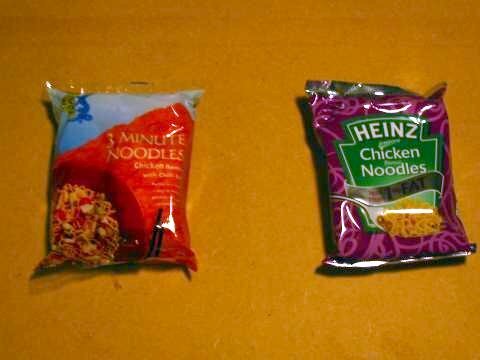 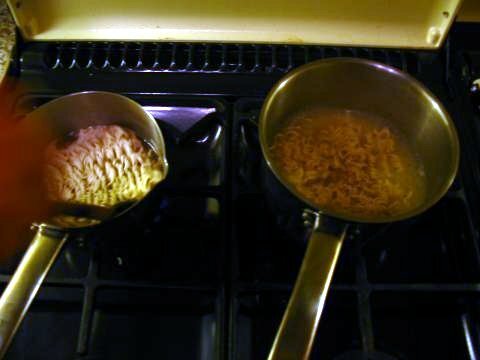 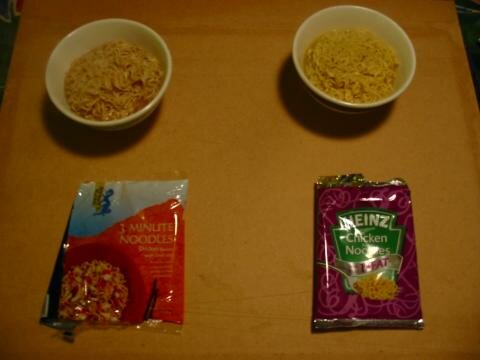 It should be noted that at this point, we were quite sick of noodles. Well, except Tarro, who was apparently happy to guzzle down the rest of the Heinz noodles, despite us agreeing that they were vile (please don't try them!). 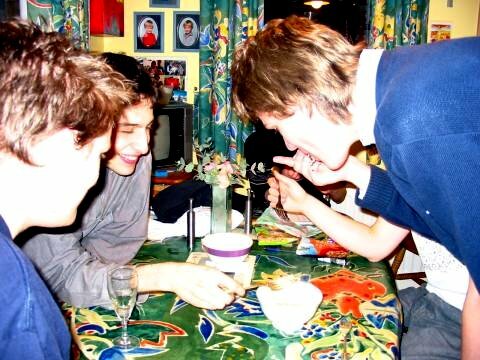 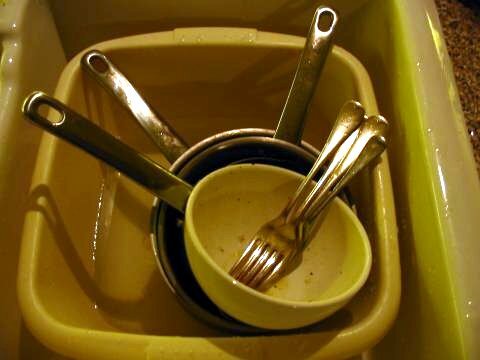 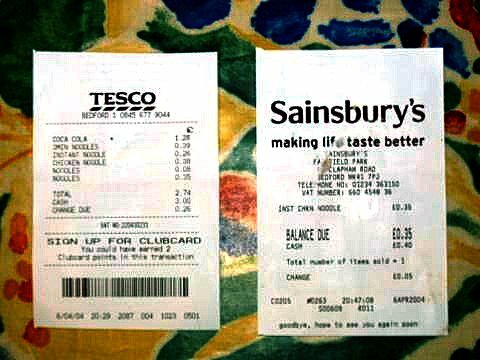 Having gathered our data with due care and scrutiny, we put it into a spreadsheet to try to make sense of it. 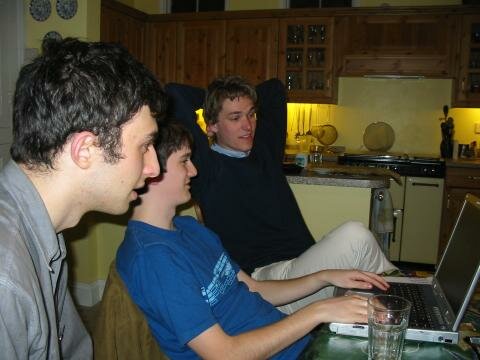 The scores for each noodle brand are shown in the table below. The most important figures are those in bold in the Ave Total column, showing how we rated each brand on average. Of miscellaneous interest are the average scores each of us gave, showing a strong preference for noodles in Tarro (perhaps genetic?), though an overall ambivalence (scores between 40% and 50%). Perhaps the fact that we aren't noodleistas has distorted our findings?

Upon finding that the LIDL noodles rated equally with the Blue Dragon noodles, and that Heinz were so close to competing brands, we decided that further analysis was needed. We tabulated other potential factors such as price, weight, the amount of water used, cooking time, and other arbitrary factors, and formulated three different algorithms to compute the relative worth of each brand. The results were as follows:

Sainsbury: -1, the packet was gooey and generally thought not to be very nice

Blue Dragon: +1, came with alternative cooking instructions for a soup

Heinz: +1, the flavouring fizzed in the pan and excited Tom and Toby; -1, they tasted AWFUL!

Further statistical analysis shows what any Happy Customer could tell you: LIDL are the best. Henry's initial attempt at an algorithm yielded promising results, eliminating the apparently respectable score that Heinz was afforded, and showing LIDL to be clearly better than Blue Dragon (the latter being exhorbitantly expensive for the quality). However, placing Tesco Value so far above Blue Dragon concerned us, so Toby stepped up to KSpread to improve our analysis.

Toby's algorithm was successful both in showing LIDL's obvious superiority, and in elevating Blue Dragon just above Tesco Value. We felt the margin was fair, given Blue Dragon's superior taste and alternative recipe, stacked up against Tesco's astonishingly cheap price. Toby also managed to factor in the arbitrary factors, which we felt to be important. However there is one anomaly so great as to warrant further development: Heinz was now deemed almost twice as good as Sainsbury's, a result we knew couldn't stand. Step up Bob.

Bob's algorithm was actually entered later in the evening, but was dreamt up in the period between the moment immediately following Toby's results, and the moment I checked my e-mail after clearing up. Suffice to say that, although still placing Heinz above Sainsbury, it narrows the margin, and inherits Toby's successful handling of LIDL, Tesco Value and Blue Dragon.